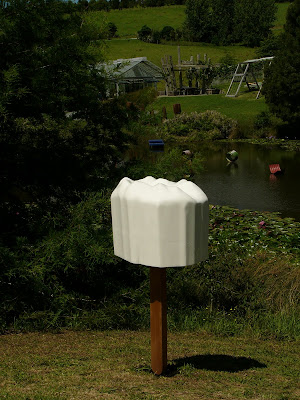 Icycle is a whimsical work that plays with scale to combine two objects not normally seen together that come from two opposing scales. This work is also a curiosity, an iceberg presented as a form of confectionery which entices the viewer to approach the work for closer inspection. The slick, white, shiny surface is reminiscent of snowy mountain peaks, and icebergs, but on a model-like scale. In the context of Aotearoa, it is a reminder of the rapidly melting icebergs that passed our southern shores not so long ago.

Although strange and quirky, this sculpture is also alludes to some serious environmental and political issues. Global warming and changes in the ozone layer threaten our safety and even our existence. The excitement of the unusual event of the passing icebergs in 2006 was mixed with the anxiety of its meaning. The concept of melting is also associated with loss, in particular loss associated with both the environment and land. It reminds us of the impact we have had historically in Aotearoa, and that we have on the world today.