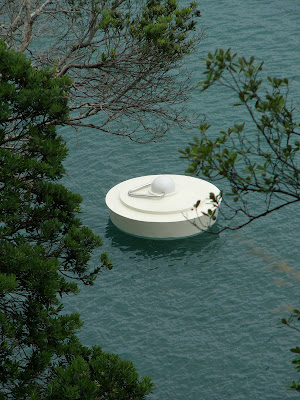 Bung (2007) is located at Connells Bay Sculpture Park, Waiheke Island and is part of the Sculpture Trust's permanent collection.

Initially shown beside a natural rock basin in the ocean at Sculpture on the Gulf in 2007, Bung is a work that can make sense in a range of sites. Situated at the end of the white jetty at Connells Bay, it extends the visual language of the land and architecture of the tranquil bay. As it extends beyond the limits of the land, the sculpture operates as a punctuation mark - the dot of an i, or the end of an exclamation mark. Oram particularly enjoys the challenge of designing and making work for dynamic environments. The water, change and the flux of the natural environment has been an on-going interest in her art practice. Bung was developed through researching materials and design in the boat building industry. The colour and materials reference modern boats and the materials used can withstand extreme salt water conditions.

Julia Oram’s art can be seen as political as well as conceptual and she is currently working on a body of work that explores notions of loss, both personal and global. For her it is essential that her work makes a social or political statement, but that it balances this with aesthetics. The tension between these aspects; essentially between reality and beauty, has been an interest and focus for Oram over the past five years. She was both inspired and awed by the sublime appearance of the iceberg flotilla that passed the South Island in 2006, which was a timely reminder of the proximity of the issues around global warming. Changes in the ozone layer and global warming threaten our safety and even our existence. The concept of ice melting is associated with loss, particularly with reference to both the environment and the land. By extension it reminds us of the impact we have had historically in Aotearoa, and that we continue to have on the world today. In a similar vein Bung alludes to environmental and political issues. Oram’s work is serious and thought provoking but also quirky and entertaining. What exactly is this bung doing – is it keeping the water in or out?
Posted by Julia at 2:51 PM